Beetle PSX is a port/fork of Mednafen's PSX module to the libretro API. It can be compiled in C++98 mode. Beetle PSX currently runs on Linux, OSX and Windows.

Notable additions in this fork are:

The Beetle PSX core has been authored by

Content that can be loaded by the Beetle PSX core have the following file extensions:

RetroArch database(s) that are associated with the Beetle PSX core:

Frontend-level settings or features that the Beetle PSX core respects.

Beetle PSX needs a cue-sheet that points to an image file. A cue sheet, or cue file, is a metadata file which describes how the tracks of a CD or DVD are laid out.

If you have e.g. foo.bin, you should create a text file and save it as foo.cue. Most PS1 games are single-track, so the cue file contents should look like this:

After that, you can load the foo.cue file in RetroArch with the Beetle PSX core.

Certain PS1 games are multi-track, so their .cue files might be more complicated.

PAL copy protected games need a SBI Subchannel file next to the bin/cue files in order to get past the copy protection.

For proper PAL game compatibility, the 'Skip BIOS' core option needs to be set to off.

To take advantage of Beetle PSW's Disk Control feature for disk swapping, an index file (a m3u file) should be made.

Create a text file and save it as foo.m3u. Then enter your game's .cue files on it. The m3u file contents should look something like this:

After that, you can load the foo.m3u file in RetroArch with the Beetle PSX core. 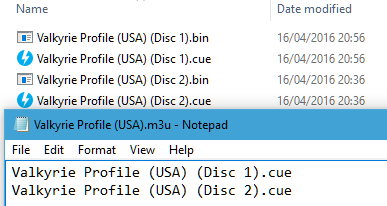 Adding multi-track games to a RetroArch playlist is recommended. (Manually add an entry a playlist that points to foo.m3u)

Alternatively to using cue sheets with .bin/.iso files, you can convert your games to .pbp (Playstation Portable update file) or .chd (MAME Compressed Hunks of Data) to reduce file sizes and neaten up your game folder.

If converting a multiple-disk game, all disks should be added to the same .pbp file, rather than making a .m3u file for them.

Most conversion tools will want a single .bin file for each disk. If your game uses multiple .bin files (tracks) per disk, you will have to mount the cue sheet to a virtual drive and re-burn the images onto a single track before conversion.

RetroArch does not currently have .pbp database due to variability in users' conversion methods. All .pbp games will have to be added to playlists manually.

To convert content to CHD format, use the chdman tool found inside the latest MAME distribution and point it to a .cue file, like so:

Note that the tool currrently does not integrate .sbi files into the .chd, so these must be placed alongside the resulting .chd file in order to properly play games with LibCrypt protection.

For multi-disc content, make an .m3u file that lists all the .chd files instead of .cue files. Like the PBP files, content must be added to playlists manually.

By default, the filenames of the Memcard savedata will match the loaded cue or m3u or pbp filename, like this:

To import your old memory cards from other emulators, you need to rename them to either the Libretro savedata format or the Mednafen savedata format.

Keep in mind that save states also include the state of the memory card; carelessly loading an old save state will OVEWRITE the memory card, potentially resulting in lost saved games. You can set the 'Don't overwrite SaveRAM on loading savestate' option in RetroArch's Saving settings to On to prevent this.

The Beetle PSX core has the following option(s) that can be tweaked from the core options menu. The default setting is bolded.

Most (all?) negCon compatible titles provide in-game options for setting a 'twist' deadzone value. To avoid loss of precision, the in-game deadzone should always be set to zero. Any analog stick drift should instead be accounted for by configuring the 'NegCon Twist Deadzone' core option. This is particularly important when 'NegCon Twist Response' is set to 'quadratic' or 'cubic'.

Xbox gamepads typically require a deadzone of 15-20%. Many Android-compatible bluetooth gamepads have an internal 'hardware' deadzone, allowing the deadzone value here to be set to 0%.

For convenience, it is recommended to make use of the 'Options → Analog Setting 1P' menu of Gran Turismo when calibrating the 'NegCon Twist Deadzone'. This provides a clear and precise representation of 'real' controller input values.

In most cases, the 'quadratic' option should be selected. This provides effective compensation for the physical differences between real/emulated hardware, enabling smooth/precise analog input.

The Beetle PSX core supports the following device type(s) in the controls menu, bolded device types are the default for the specified user(s):

Rumble only works in the Beetle PSX core when

A list of known emulation bugs can be found here https://forum.fobby.net/index.php?t=msg&th=1114&start=0&