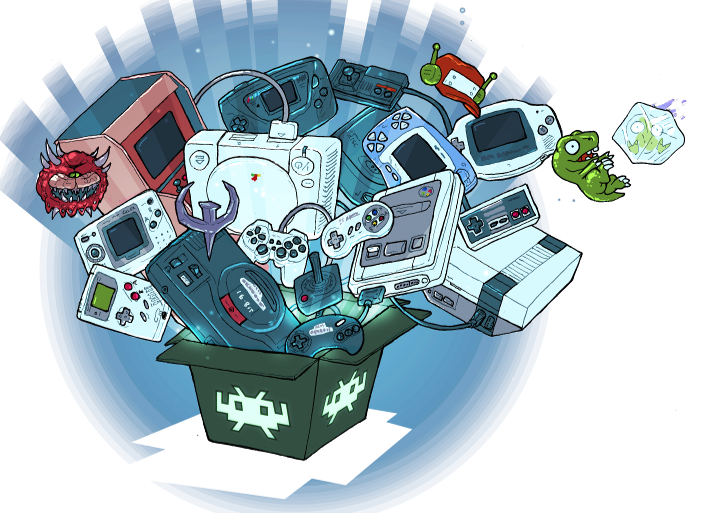 RetroArch is a frontend for emulators, game engines and media players.

RetroArch can run on the usual platforms like Windows, Mac OS X and Linux. RetroArch also runs on Apple and Android for tablets and phones, as well as on game consoles like PS3, PSP, PS Vita, Wii, Wii U and more!

RetroArch is capable of next-frame responsive time. This means that there should be no nearly no perceivable difference in terms of input latency from real hardware, FPGA/clone or original hardware. On top of all that, there are various settings you can configure to optimize the results even more.

Common game controllers are automatically configured when plugged in, just like a real console. Ideal for multiplayer games when a friend brings their own controller! You can also configure controllers manually to assign special actions to button combos.

Shaders are efficient graphical filters that can greatly improve the rendering of old games. They can also be used to replicate the look and feel of old CRT monitors. You can even stack them to create your own effect. The possibilities are endless.

Unlock achievements on your favorite classic games! Unlock trophies and badges like on a modern game consoles!

Host or join a network gaming session. Rediscover the joy of multiplayer games using RetroArch built-in netplay lobby. You can also use the spectator mode to watch others play.

It enables you to run classic games on a wide range of computers and consoles through its slick graphical interface. Settings are also unified so configuration is done once and for all. In addition to this, you are able to run original game discs (CDs) from RetroArch. RetroArch has advanced features like shaders, netplay, rewinding, next-frame response times, runahead, machine translation, blind accessibility features, and more! RetroArch is the official reference frontend for libretro "cores": applications that include emulators, game engines, and media players. Settings are also unified across cores with advanced features like shaders, netplay, rewinding, and more! Libretro is a simple backend API for emulators, game engines, and media players to be run through a unified GUI.

Which platforms is RetroArch available for?

What is the license for this?