Storing games and other content¶

Game ROMs should be placed within the roms folder as configured in RetroArch. Many users sort their ROMs into subfolders named after the system which the ROMs belong to, which results in a folder arrangement such as:

This arrangement is not required and you are free to organize your ROMs as you prefer.

Playlists (or Collections as they are sometimes referred to) are the lists of games and other content that can be generated automatically by the RetroArch playlist scanner, generated by a third-party playlist utility or script, or edited by hand in a text editor.

RetroArch incorporates a ROM scanning system to automatically produce playlists. Each ROM that is scanned by the playlist generator is checked against a database of ROMs that are known to be good copies.

In order for content to be correctly scanned, you must:

Finally, the content must match existing databases from the libretro-database README. If those conditions are met but content is still not being added automatically to a playlist, consider submitting an issue report on github.

Designating which core to use¶

RetroArch will attempt to detect and use the correct core for use with the ROMs that are used as part of a playlist. Under some circumstances, it may be useful to manually set a particular core for one of its playlists. This can be accomplished within the Playlists submenu in the RetroArch settings.

Each playlist is a plain text file with an extension of .lpl. RetroArch 1.7.5 and later uses a JSON playlist format, although the backwards compatibility remains for the deprecated "6-Line" playlist format.

Note: The paths in playlist files need to use the correct 'slash' character for the user's platform. Linux, OS X, and Android systems including Lakka and LudOS require forward slashes /, while Windows and DOS systems require backslashes \.

The built-in Notepad editor cannot work with cross-platform text files such as RetroArch playlist files. Many users and developers recommend the free Notepad++ as a replacement although most alternative text editors will also work.

The following example is a single-entry MAME 2003-Plus playlist for Alien Arena -- the silent version of this game is available through the RetroArch Content Downloader found in the Online Updater menu.

The romset with the label Alien Arena is located at path being C:\retroarch\downloads\alienar.zip; note that the backslashes are doubled in JSON-formatted playlist entries so that the value of the path entry is C:\\retroarch\\downloads\\alienar.zip.

The ROM's corresponding db_name is MAME 2003-Plus.lpl which tells the menu driver which ROM database to use for looking up the game's metadata, thumbnails and game-system-specific icon-type. Menu drivers which implement playlist icons will use it to display it next to the ROM's name.

You can omit the CRC or Serial for a manually created playlist entry by using the word DETECT instead, although it may limit your ability to use netplay for this playlist entry.

This playlist format is deprecated and may not always be supported by RetroArch in the future. New playlists should be created in the JSON format.

Each entry in a playlist must be composed of 6 lines:

content_favorites.lpl and content_history.lpl are examples of default playlists which have this cross-platform behavior. So study them as an example first.

To create a custom playlist¶

Customize how/where your playlists are shown¶

How to set up custom playlists (Screenshots)¶ 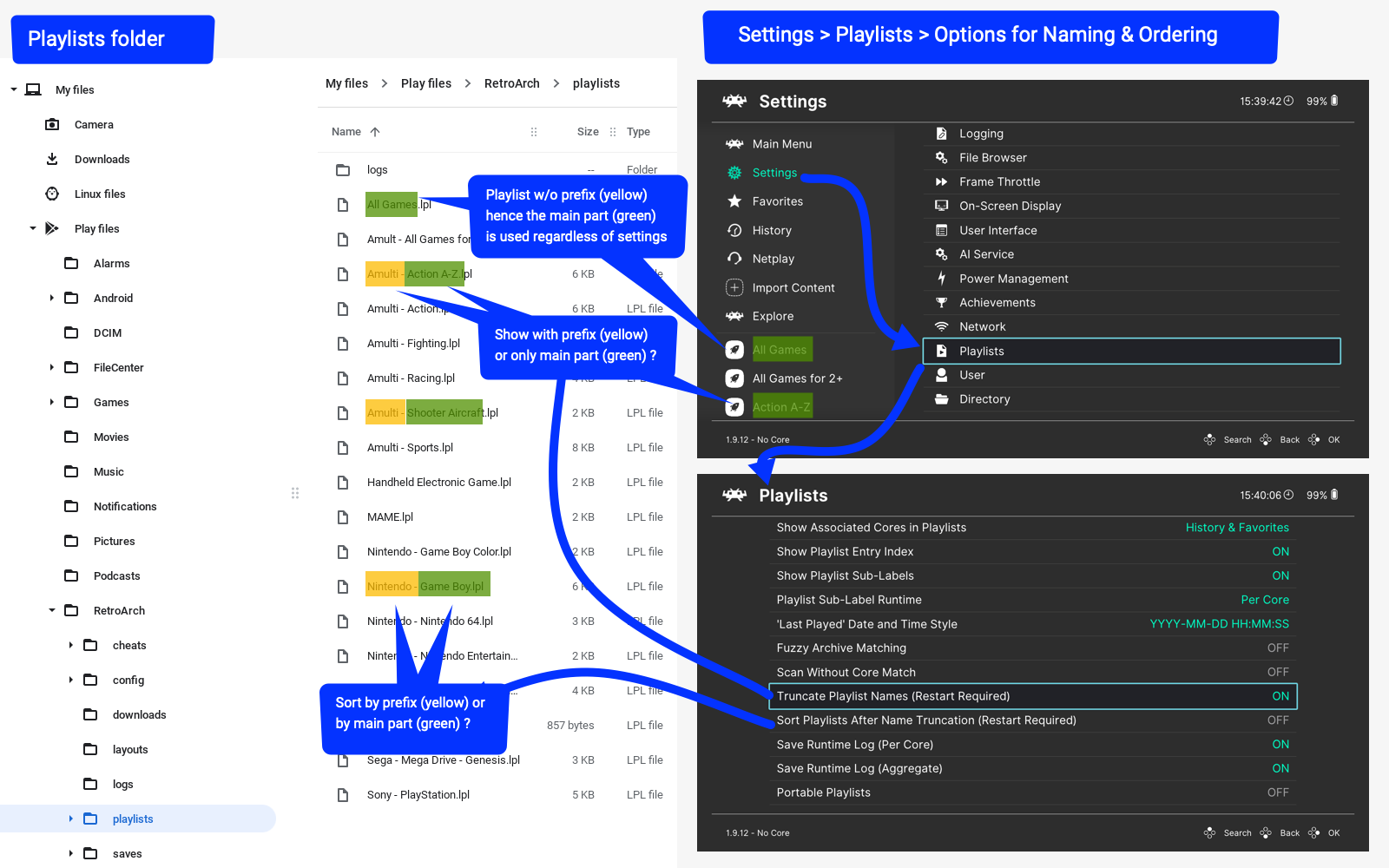 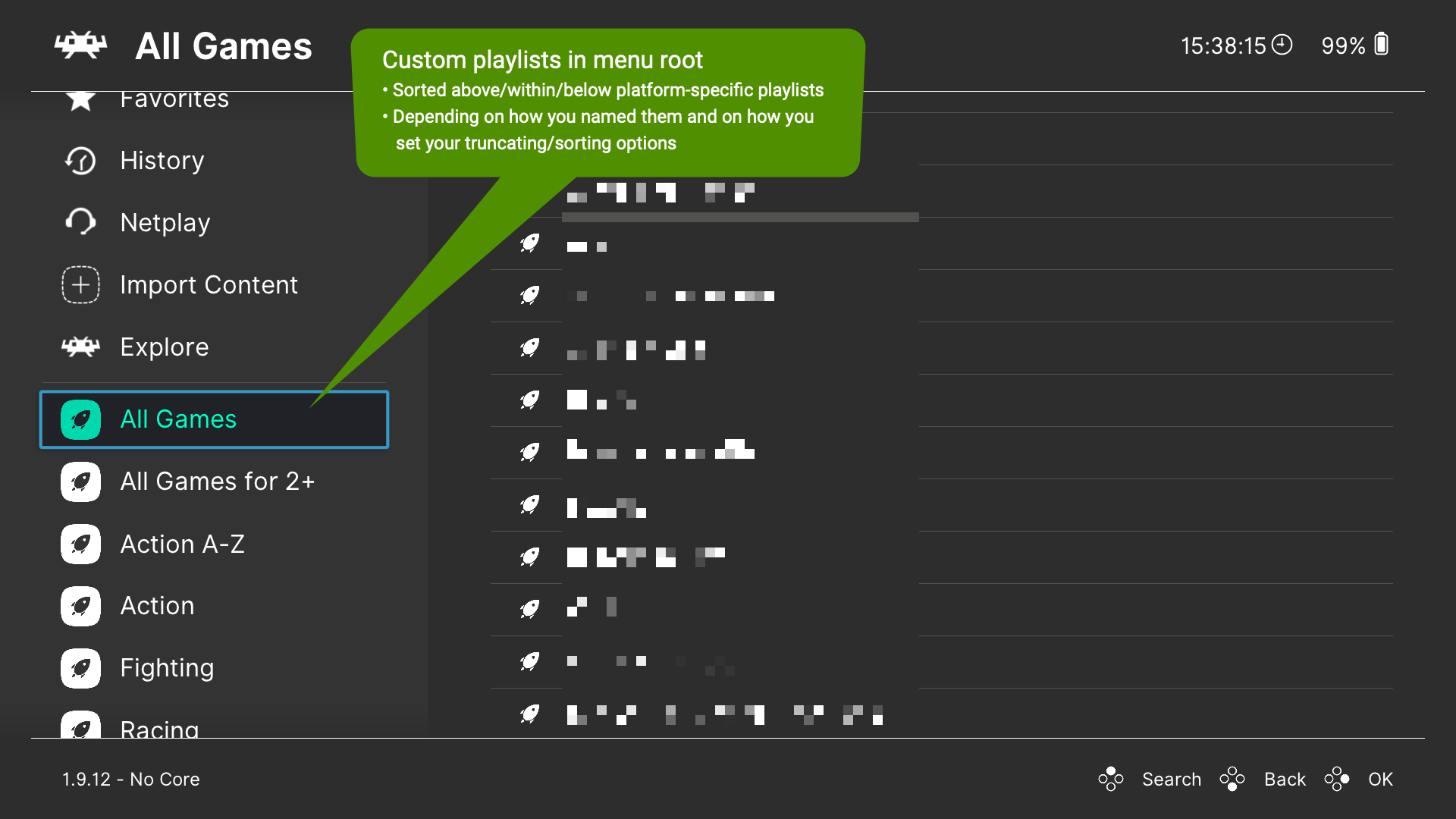 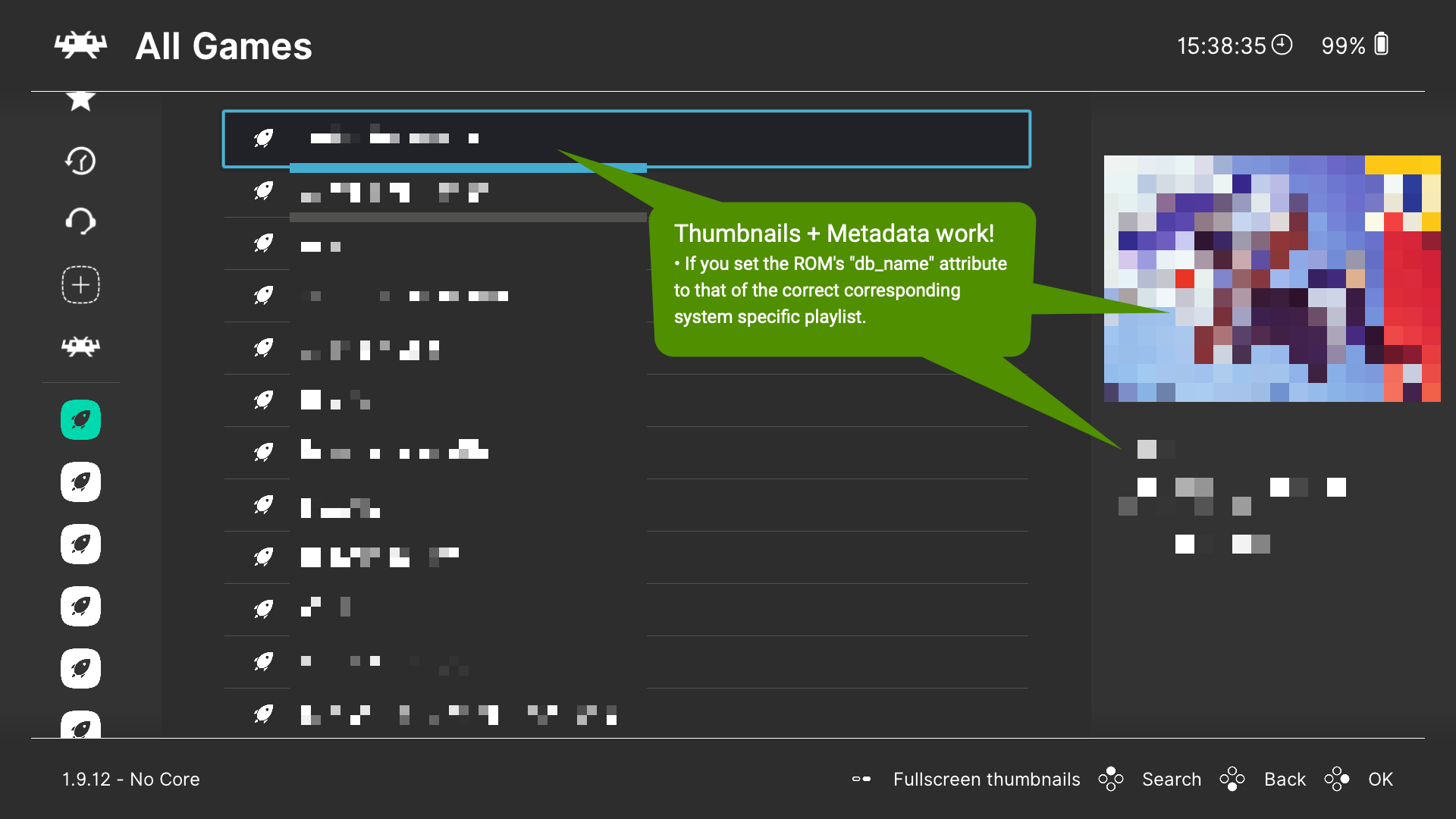 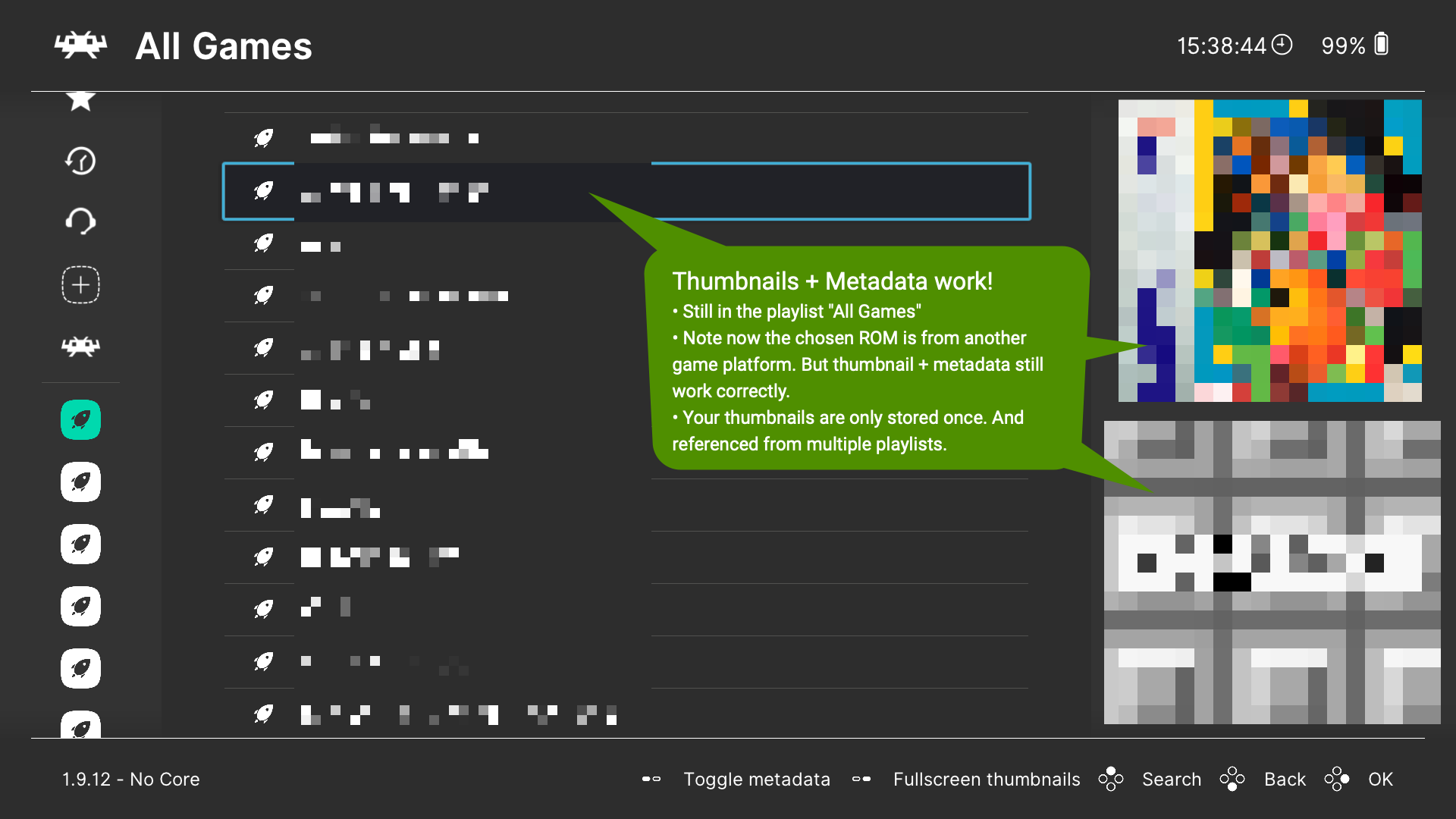 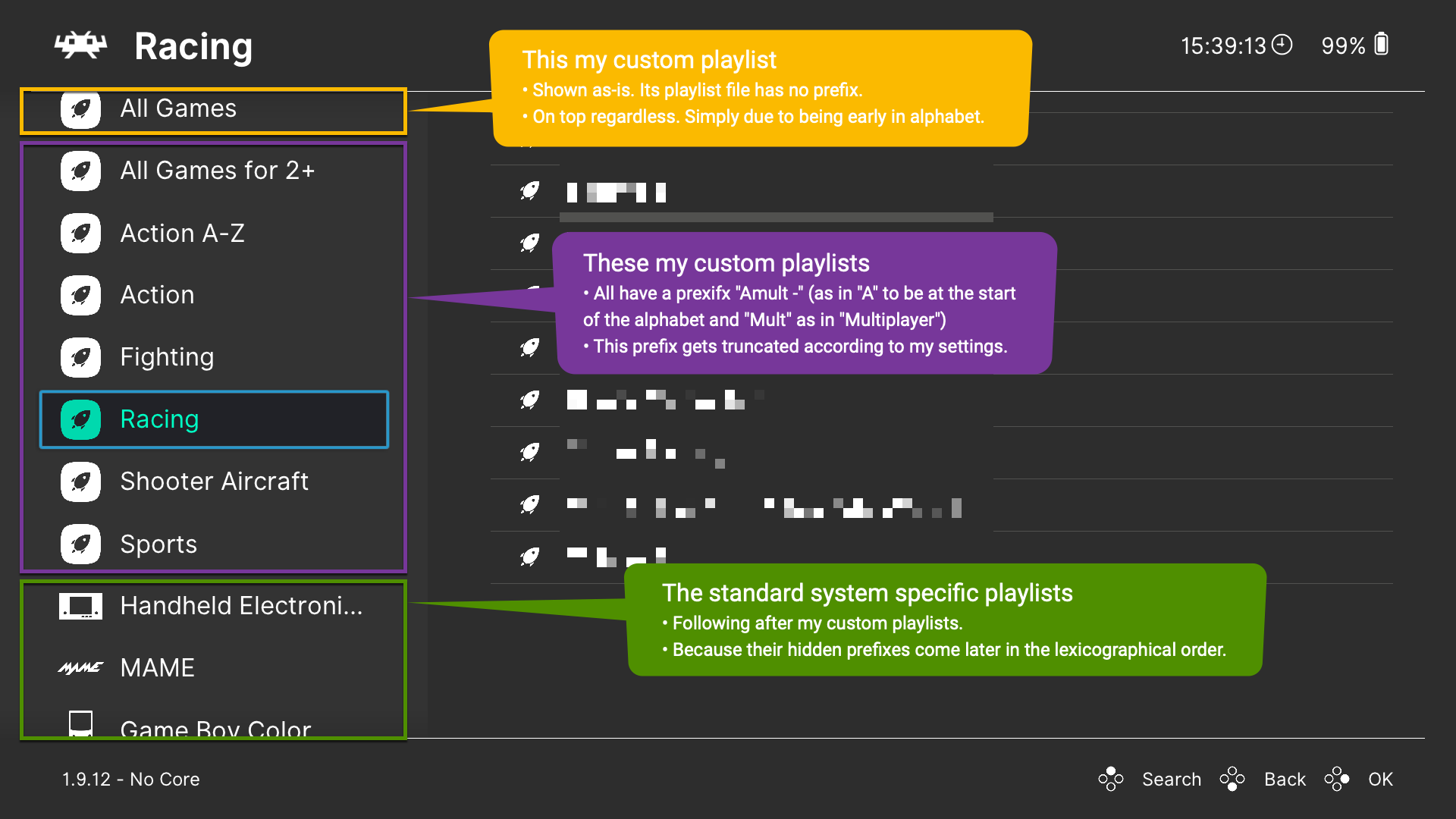 Since playlists are managed in text-only JSON format, there are a few third-party applications to help manage your playlists.

RetroArch can display three types of thumbnails for games in playlists, depending on the specific RetroArch menu driver in use: RetroArch provides packs of thumbnails suitable for use with many emulated systems. These thumbnail packs are recommended for most users and can be installed connecting to the internet and using the built-in thumbnails updater, available from the online update menu within the RetroArch settings interface.

Users who wish to use their own thumbnails can do so by naming PNG image files according to the RetroArch naming convention.

Thumbnails should be stored in subfolders within the configured RetroArch thumbnails directory within a subfolder named exactly the same as the playlist, except without .lpl at the end. Example: If your playlist is named Atari - 2600.lpl, then your Atari 2600 root thumbnail folder should be called thumbnails/Atari - 2600/.

Within this root thumbnail folder called Atari - 2600, you should then create subfolders named Named_Boxarts, Named_Snaps, or Named_Titles for boxart/cover art, in-game snapshots, and title screens, respectively.

The thumbnail filename should exactly match the game's title as listed in the playlist with an important exception. The following characters in playlist titles must be replaced with _ in the corresponding thumbnail filename: &*/:`<>?\|

Example: If your content is named Q*bert's Qubes in the playlist, then its thumbnails should be named Q_bert's Qubes.png and stored at these paths: